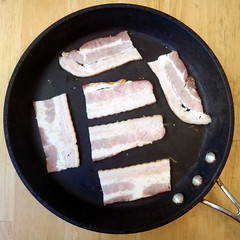 Wake up to the smell of Bacon Cooking!

You know everyone loves the smell of breakfast cooking in the morning?  Yep, I sure do and there’s no better way to subtly render me conscious than to throw some tasty bacon on the griddle!

So wouldn’t it be cool if they invented an alarm clock that instead of having an annoying alarm buzzer or playing music, it would cook some bacon?  This would be an awesome alarm clock, plus it would save you time on cooking breakfast.  As long as you had a coffee pot with a timer on it, then you’d be set!

Well check this out. There’s a California man by the name of Matty Sallin that did just that!  Yep, you heard me right, he invented an alarm clock that wakes you up with the odor of yummy bacon cooking.

This thing is called Wake n’ Bacon…LOL  The way it works is, it turns itself on ten minutes before you are scheduled to wake up and slowly sizzles slices of bacon by using halogen lightbulbs.  Then it has a built in fan that blows the aroma across your sniffing path!

I would never wake up on the wrong side of the bed again, you can guarantee I’d wake up on the right side.  That would be the one with the bacon cooking!